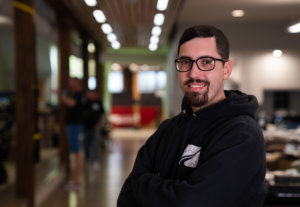 Previously a customer of National Speed, Anthony took the leap into becoming a part of the speed industry! Anthony’s experience in commercial door sales and used car part reselling during his time at UNCW, allowed him to become our first Inside Performance Consultant.   Here he applies his skills and knowledge to our company and helps customers understand the potential hidden under the hood.

In his free time, Anthony enjoys restoring and manufacturing retrofit headlights/tail lights, working on his personal fleet of vehicles, fishing, video games, and spending time with his girlfriend Holly and their two cats. His current vehicles include a 2004 Mazdaspeed Miata, a 2004 Mustang Mach 1, a 1967 Mustang, a 2000 S10 parts hauler, and a 99 Miata that he purchased for $500 and built from the ground up; even going so far as to install a turbo kit on it in the parking lot of his apartment complex as a senior year present to himself! As the resident "slow car" enthusiast, Anthony is always happy to talk about Miatas and operates the local group ILM Roadsters.