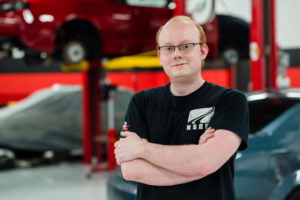 Jackson joined the National Speed Richmond team as Performance Technician, with a wealth of technical experience acquired as a Ford dealership Master Technician, and a lifelong passion for high-performance cars!  Jackson is one of those guys who never stopped asking why – and this intellectual curiosity, combined with a keen ability to quickly grasp new complex concepts, and a hard-charging desire to constantly improve his craft, makes Jackson a unique & valuable addition to the team.

Jackson has been involved in a wide variety of high-performance builds over the years, but his two current personal projects are exceptionally unique.  One, his 14K original mile 2007 Ford Ranger that is going under the knife for a Coyote 5.0L engine & T56 6-speed swap, topped off with air ride suspension.  And two, his super-sleeper 2012 Ford Focus that is receiving a Focus RS AWD drivetrain, powered by a hybrid EcoBoost 2.0L (Focus ST) engine with a 2.3L (Mustang EcoBoost, Focus RS) cylinder head, with all the supporting modifications needed to exceed ~400awhp.

In Jackson’s off time, he thoroughly enjoys researching his upcoming projects to be as prepared as possible (that intellectual curiosity in full effect!), enjoying a broad range of music personally or at shows, experimenting with electronics & technology projects (always trying to find new ways to incorporate a variety of electrical devices into OEM CANBUS networks), and spending time with his family.