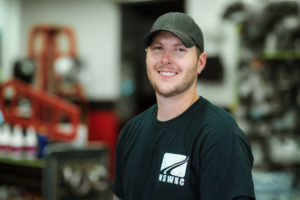 Matt Drake joined the National Speed Wilmington team as Calibrations Assistant equipped with a broad understanding of both the technical & calibration sides of high-performance cars, acquired from years of building & modifying performance vehicles.  During & after his service with the United States Marine Corps, Matt became well known in the local automotive community surrounding Camp Lejeune, as a go-to performance resource for his fellow Marines.  After Matt retired from the USMC, he decided to expand upon these skills, and became a certified technician for both Subaru and VW vehicles.  This unique background & skillset wonderfully equipped Matt for his current role with National Speed!

In his role, Matt is responsible for all activity in the dynamometer cell.  Whether he’s working with our Senior Performance Calibrator so that he has everything needed to perform high-quality remote calibrations, or performing necessary mechanical work on customer vehicles to prepare them for successful calibrations, or strapping customer vehicles down for dyno runs.  Everything that goes on inside the dynamometer cell is in Matt’s purview.

Matt’s passion for modifying cars started at the young age of 16-years old, when he performed his first ever modification – long-tube headers on his 4th generation Chevrolet Camaro.  From there he was hooked!  Shortly thereafter, he was bit by the turbocharged bug with his 1998 Eagle Talon TSi, and over the years has built several highly-modified Subarus, including two of his personal 400awhp+ Subarus (’06 WRX STi & Forester XT), leading up to his new personal project, his 695whp 2008 BMW 335i, that he is now in the process of (re)building to meet his goal of 800whp.