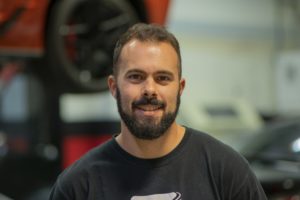 Alex joined the National Speed Wilmington team as a Performance Technician with a diverse background of both repair and performance across European and Domestic platforms.  For the last 5 years leading up to his current role with National Speed, Alex worked as a Senior Technician at a local Ford dealership executing diagnostics and major powertrain repair, and 5 years before that doing the same across a wide variety of makes and models at an independent repair and performance shop in New York.  In his spare time, Alex has been involved in many insanely-cool builds ranging from fully-built air-cooled Porsche 911 Turbo track cars, turbocharged VR6 builds, a variety of fully-built 1.8T Audi builds, supercharged E36 M3s, and Ford Mustangs alike.  With his professional experience and background with high-performance builds, it goes without saying that Alex is an incredible fit as a National Speed Performance Technician!  In his spare time, Alex enjoys working on his M52-swapped E36, and building rifles, and testing them out at the shooting range.