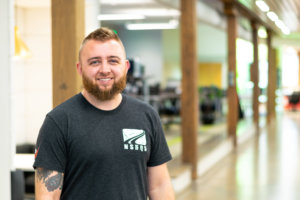 A lifelong performance enthusiast with a heavy background in computer networking & systems administration, Charlie joins the National Speed Wilmington HQ team as Systems Manager with the perfect combination of skills for the role!

In his personal time, Charlie enjoys going off-the-grid in the great outdoors – both off-pavement & on-pavement alike.  An avid outdoors enthusiast, Charlie enjoys spending time with his son Legend, mountain biking, kayaking, and hiking.  But for his on-pavement fun, Charlie has quite a tool at his disposal: his fully built Urban Grey 2007 Subaru WRX with a ripping 503awhp/532lbft on tap. Charlie also sports an abstract, VF37 factory twin-scroll swapped, Platinum Silver 2004 Forester XT as his daily driver. As an active member of North Carolina and Virginia automotive communities, Charlie also served as admin for one of the largest/most active Subaru enthusiast groups in the central Virginia area, RVA Subies.