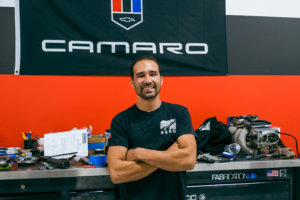 Dom joins National Speed Richmond with a career full of high-performance experience and knowledge!  Starting off in his teenage years, Dom began working on cars professionally in his parents’ automotive shop until the age of 16 when he left to attend trade school.  From there, Dom studied Automotive Technology at the University of Northwestern Ohio where he earned three associate degrees in Automotive, High Performance, and Diesel.  Over his career, Dom has built everything from 2JZ-swapped 350Zs, 2JZ-swapped classic Mercedes-Benz, SR20DET-swapped FB RX-7s, full restomods including everything from a 427cid-swapped ’67 Mustang to an LSA-swapped ’72 442, full builds on every generation of Viper, Corvette, and Camaro, a wide variety of big-power Subarus, GT86/BRZ/FR-S, Dodge Chargers/Challengers, and everything in between.  In his spare time, Dom is a well-known Fire Poi performer and travels across the nation regularly for performances.  When he’s not on the road, he enjoys working on his fully-built 426cid-equipped (400 based) 1983 Chevrolet Camaro.  When asked why Dom didn’t just jump to an LSx swap, he replied, “as much as I love EFI, it’s still just too much fun beating people with a carburetor.”  It goes without saying, Dom is the Renaissance Man of the group! (edited)