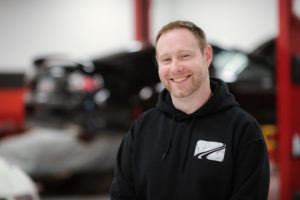 Josh has had what he calls a passion (his wife calls obsession) with the automotive performance industry for as long as he can remember. He started out with a 2001 Honda Civic in high school, and really had fun with it while pursuing an automotive technology degree in college. From there his passion continued to several different makes. DSMs, Corvettes, Subarus, diesels, etc. Every one of those cars saw the autocross parking lots in Richmond, the tracks at VIR, Summit point, MIR, and anywhere else he was able to put them to the test.

Josh went to work with CarLotz, Inc. in December of 2013 after experiencing the difference they provided in the automotive sales industry. The excitement of changing an industry to provide excellent service, transparency, fun, and integrity was something he felt he had to be involved in. Starting as a sales coach with CarLotz, Josh quickly took over the general management position at two of their most profitable and efficient retail locations. Most recently, he was promoted to Director of Fixed Operations and began building and creating CarLotz reconditioning centers in Richmond VA, Charlotte NC, Tampa FL, and Chicago IL. While it was been a fun and challenging endeavor, Josh had been missing one aspect – PERFORMANCE!