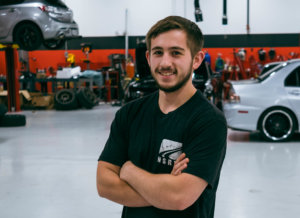 Michael’s gravitation to the performance industry started at a young age, stemming from growing up around circle track racing.   Shortly after he got his first car, a DB7 Integra, he dove into modifying the car and teaching himself along the way.  After a short stint in the construction field, he decided to pursue his dream of being a performance technician.   Starting in a small Subaru shop in Maine, he learned from those around him and has since built several 500+hp STI’s, and a 600+hp FA20 WRX beast. His passion for the performance industry continues to grow and show in his work, day in and day out.