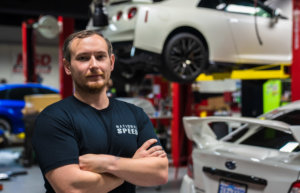 Pascual started 10 years ago sweeping floors in a speed shop, was bit by the HP bug, and never looked back. He is a car nerd, a Toyota/2JZ enthusiast, prefers to use vacation time going racing than to the beach, and believes Q16 is the best smelling race fuel.  Speaking of race fuel and racing, TX2K (Supra Nationals) and World Cup (Imports VS Domestics) are the car events you will find him at every year.  Previous cars he has owned include an 850WHP TH400 MK4 Supra and a 600WHP 2J R154 MX83 Toyota Cressida.  His current project is a 1995 2J Toyota Crown Majesta.

His daily driver is an all-original, stock 5-speed, 1995 Accord Wagon. Hobbies include going to the gym, racing, Xbox, watching various combat sports…..but who needs hobbies when you work at his equivalent of Disney Land.