Coke vs Pepsi. Freddy vs Jason. Turbochargers vs Superchargers. The debate has raged since the dawn of time (slight exaggeration), and in the case of forced induction technology, shows no signs of stopping anytime soon. The ultimate irony is that both technologies are basically the same thing, they just derive their power in different ways. So which is better?

The Basics
Let's start by examining the primary difference between a turbocharger and a supercharger. Cliff notes version: a turbocharger is powered by the exhaust gases of the engine whereas a supercharger is belt driven off the crank pulley. What this means is that a turbocharger uses wasted energy to make power. The drawback is that you may experience turbo lag, but that usually only happens with larger sized turbos.

Because a supercharger is belt driven, its power is based solely on the engine's RPM's. So the faster the motor turns, the quicker it turns the belt, which in turn produces more power. The good thing about this is that there's no lag whatsoever. The bad thing is that because superchargers "take power to make power" there's a potential for it to raise your gas bill. Generally, superchargers are preferred by drag racers because there's no turbo lag. However, turbocharger technology is improving to get off the line faster.

Head to Head
One of the benefits of working in a high-performance auto shop is that you have some of the coolest toys to play with. In this case they happen to be two Nissan 350z's -- one outfitted with a Turbonetics 60-1 turbo and the other with a Vortech supercharger. We put them head to head on the dyno. 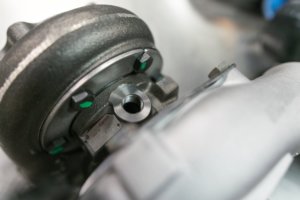 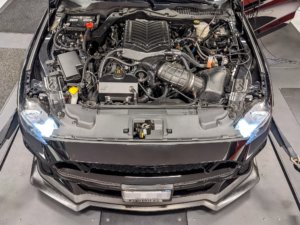 The Bottom Line
In this particular case, the turbocharger showed better results than the supercharger. However, there really is no clear cut answer as to which method of forced induction is better. They both have advantages and disadvantages, and when it all comes down to it, either one will give you a considerable boost over stock. The ultimate choice comes down to you and what best suits your driving style.